Another Edition of "HumanityCritic's Asshole moments"

I'm in no way trying to make light of anyone with mental disabilities, the only times that the words "glass licking retard" even escape my heavily bearded mandible is when I'm referring to some inbred monosyllabic rapper - yes, I'm the type of asshole to laugh when old people fall down staircases or when some dime-store harlot gets her weave pulled out by some disgruntled female at a miscellaneous club, but I've never found myself laughing at the mentally handicapped. Maybe it has something to do with me growing up with a kid who had a mentally challenged brother, it seems that people are more accepting of others when they are in their formidable years - even though there were distinct differences between my friend's younger brother and the rest of our crew, we gave him atomic wedgies and hit him with piss flavored urine balloons like everybody else. Even though its been 15 years since I've seen my old friend and his brother, I ran into them in the mall the other day - and as I approached them the young man that I had credited my acceptance to mentally challenged people the world over started clapping his hands and screaming "Asshole!! Asshole!..Motherfucking Asshole!!!"

Sugar Mama: The one thing that I absolutely loathe about the watering-holes in my area, besides the constant karaoke that makes sane people want to drop a live grenade down their shorts and all the sub-par women who I wouldn't fuck if they happened to own the last vagina on earth - is an old lady named Gladys that I see entirely too much of. She's nice enough, always greets me with a warm smile, and even though the amount of money it would take for me to fuck her would bankrupt most prospering countries - she does throw compliments my way, which I enjoy since my self-esteem is lower than midget manic depressives. That being said, she's always hanging around men young enough to be her grandchildren - and even though I have no quarrel with a baby boomer getting their unadulterated fuck on with people 40 plus years their junior, its just her air of confidence that kind of bothers me. I mean, to act like your looks and not your swollen purse is what landed you such young company is arrogance that borders on criminal insanity - so when she made her way to the bathroom this is what I leaned over and told her young beau of the night. (leaning over) "Dude, how old are you? 21?(pointing at some onlooking women) What are you doing fucking one of "The Golden Girls" anyway? There are women in this building with asses so tight that you could bounce a quarter off of it. Ever tried bouncing a quarter off of a 65 year old ass, you'd be lucky to ever see that fucking quarter again!! Really, are you that hard up for cash? I bet you dollars to donuts that making love to that old broad is like fucking the skin rolls on an Irish Bulldog. Leave while you have the chance!!!" He didn't leave, but he just stared off into space and occasionally flashed me dirty looks when I starting singing the first few words of "The Golden Girls" theme song: "Thank you for being a friend..."

A Brutal Game of Dodge-ball: I have to tell you, ever since my local YMCA Incorporated a Dodge-ball program a couple of months ago my life has changed dramatically - sure I've lost weight, but nothing makes a self-involved prick like me happier than being able to completely see my cock. Basketball was alright, hacking the shit out of old men who dared to score on me was fun - and I can't forget about the way I used to block their shots and say shit like "Get that shit outta here!! Don't you have a diaper you should be soiling in, or a bingo game to be at motherfucker!!" Good times, Good times. But nothing beats dodge-ball, reliving 4th grade when I used to abuse the weaker kids and humiliate the self titled "bullies" - exercising my daily frustrations by making sure that the print of the ball is on the side of some poor bastards face. I was having the absolute time of my life, that was until a gentleman named Dexter showed up - a single amputee who we've had to cater to like he was a sick child or some shit. I mean, what better way to feel like you're being treated like everyone else than to get your ass crushed with a 70mph rubber ball - but somehow the consensus was that we were to take it easy on Dexter, and that's exactly what I did. For a while. But after I found myself being mercilessly hit by Dexter, when I was already called out and sometimes for shits and giggles when I was sitting on the bench - that's when I decided that I needed an understudy to take over my critically acclaimed role of Mr. Nice Guy. From that point forward, the only target that I aimed for was Dexter's prosthetic leg - sometimes throwing 2 balls at a time at it, sometimes screaming "You're going down Hop-a-long Cassidy!!" in the process. So now everyone there at the YMCA thinks I'm a dickhead just because of how one of the balls I threw happened to cause his leg to fall off - and as he sat on the floor trying to re-attach it, I proceeded to hit him in the face with 3 more dodge-balls. Take that motherfucker!

Drive-thru Incident: One of the results of me being such a phenomenally impatient lunatic is that I try my best to not keep people waiting myself - only uttering a few words to cashiers, avoiding lengthy conversations with bank tellers, I even avoid talking on my cell phone while I'm driving since I detest that so much when I'm behind such chatty fucking Cathy's. That being said, I was completely taken aback when I noticed in my rear view mirror a lady very casually shooing me with her hands as soon as I grabbed my Chickfila breakfast sandwich the other day - as if I was taking a calender year to gather my grub and proceed. As I crept up I noticed her mouthing something that I'm sure were obscenities, this time more aggressively motioning with her hands her eagerness for me to "get the fuck on" as one of my southern friends would say - that's when I parked my car right where it was, raised the emergency break, locked my door and proceeded to casually walk inside the establishment with my newspaper. After a few minutes, while I was peacefully reading the sports page - the visibly irritated woman who was previously upset with me entered the establishment and asked me what the problem was. That's when I very causally looked up at her and asked, "Who in the fuck where you waiving your hands at anyway??" That's when the woman, 5 staff members of the eatery, and a handful of customers proceeded to call me a "fucking asshole" in unison like they were practicing at a church choir rehearsal. 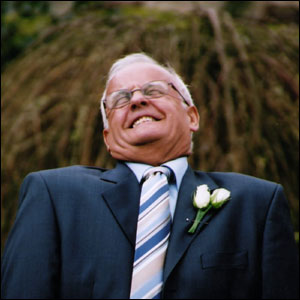 I only amuse myself: I pretty much view humor the same way I view the handful of sexual encounters I've had, as long as I get myself off that's all that really matters - I'm the human embodiment of a Tyler Perry play, you go there with the highest of hopes and leave dissatisfied. That being said, for the last 20 years or so I've always gotten a kick out of meeting famous people and telling them how much I loved them in some obscure role that they played. Like the time I met Kim Cattrall of "Sex in the City" fame and passionately told her how much I loved her in "Police Academy", the time I told Morgan Freeman that his best work was as Vincent the Vegetable Vampire on "The Electric Company" - I'm a big John Cusack fan, but I couldn't pass up the opportunity to tell him that his role as Bryce in "Sixteen Candles" was an Oscar-worthy performance.

Also, when I'm out on a date an find myself being on the business end of an extremely long wait inside of a restaurant, or if I see a very long line at a club that I'm trying to enter - I approach the Maître d' or bouncer and say "If you let me go ahead I'll make it worth your while!", handing them a folded one-dollar bill with the a straight face. I know, I'm a douchebag.
Posted by The Humanity Critic at 3:13 PM

1- PLEASE tell me you did not REALLY knock some guy's fake leg off, and then proceed to throw more balls at him. I mean I laughed out loud at the visual, to the point of tears and everything, but DAMN that's all kinds of wrong!

That morgan freeman shit was just too funny

thank u for being a friend...
yo, I watched that show on more than one occasion...lol.

Lol at this whole post...you're an asshole...I prolly don't have to welcome you to the club but, Welcome.

it's a really nice blog thanks for add my comment...

Play you bingo games, learn how to play bingo, online bingo games with us and if you want to read bingo rules and all about bingo games then click on www.yourbingogame.com and get fun all your bingo games.Bingo Rules