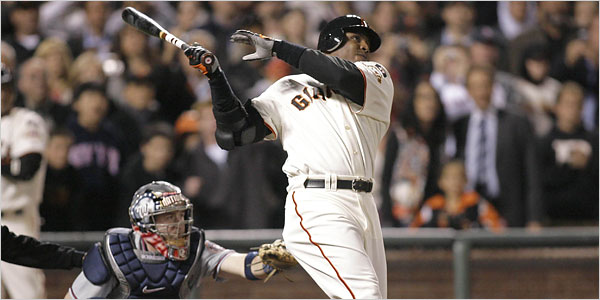 To say that I'm a huge Barry Bonds fan or even an intense aficionado of the sport of baseball would be completely dishonest - even though there have been two things over the past three years that has connected me with the newly crowned Home Run King. Right before sex, the exact point when a woman has lowered her standards and decided to let a chubby pre-ejaculator clumsily enter her in any given orifice - while she's disrobing and my eyes are fixed on her chocolate breasts and backside that I plan on eating mac and cheese off of at some later date, I find myself mumbling "Barry Bonds, Barry Bonds like a motherfucker!!" When the woman inquires about me invoking the name of another man before exchanging bodily fluids I say, "Because I'm about to hit that shit outta the park baby!!" - even though that shit backfired when I had sex with a legitimate baseball fan once, me pumping away as she very cavalierly whispered in my ear "Actually what you're doing is laying down a bunt, stumpy!!!" I also connect with Mr. Bonds because with every home run I hit I arrogantly pose for at least 3 seconds after swinging for the fences - granted it's a slow pitch softball league, and I'm on a team where my own teammates hate me because I scream "You've just served up a souvenir for some kid, motherfucker!!" to the opposing pitcher as the ball goes sailing through the air - while checking my text messages as I slowly round the bases. But I never felt compelled to write about the brother until the last couple of days , based on the 24-hour anti-Bonds propaganda machine that ESPN has turned itself into since Barry hit number 756.

Listen, if you are a legitimate baseball purist who sincerely feels that Bonds cheated the game, fine, I have no quarrel with you - the cloud of steroid speculation that follows Barry Bonds around makes him look like the character "Pigpen" in those Charlie Brown cartoons. But as much as Bob Costas attempts to sound authoritative while he waxes poetic about this being a "Tainted Record", Keith Olbermann dedicates entire segments of his show tearing down the future Hall of Famer, or the shitload of ex-players who never had a tenth of Bond's talent that ESPN drags out to trash the man - it is my honest opinion that you're average fan really doesn't give a watery shit about steroids, no matter how much sports writers want us to. Not for nothing, but if you put an asterisk next to Bonds' record then you have to put one next to any pitcher of note who ever threw a spitball, alongside any record of a player who happened to play before the league was integrated, beside Bud Selig's name for the "Steroid Era" happening under his watch. Matter of fact, put an asterisk next to Baseball in general for not even having a rule against steroids when Bonds was supposedly taking them - also, put an asterisk next to the ever so hypocritical fans out there, who in New York mercilessly hit Bonds with steroid taunts the night before they warmly welcomed back pitcher Guillermo Mota from a 50 game suspension of said substance.

Besides, I'm a black man with a persecution complex for Christs sake - the multitude of ways that the government has tried to get Barry Bonds, I'm thinking about having his number tattooed on my body beside my Huey Newton and Bobby Seale ink. Everything from getting his closest friends to turn on him, asking other players to wear wires around him, even hoping to get him convicted of Tax Evasion on some "we have to get the black bastard on something, Al Capone" shit. I'm personally all for a person taking illegal substances to enhance your performance, think of all the dope music(pun intended) we'd be without if Bob Marley or Jimi Hendrix didn't feel the same way.
Posted by The Humanity Critic at 12:42 PM

I'm with you, brother. They need to stop hatin' on him, especially since nothing was ever proven.

Cuz we all know that "guilty until proven innocent" is a burden that every brother carries, even if all he's doing is driving his car to the 7-11 for milk and pampers in broad daylight on a Saturday afternoon.

Amen, Critic. What I wonder is why they haven't tested Roger Clemens. The fucker is what?....300 years old and still pitching 104 mph fastballs? Just b/c his physique is less studly than Barry's, no one's batted an eye in his direction. Or is there another reason...something to do with his skim-milk-esque complexion? Just playing devil's advocate. They just crucify Barry b/c he's never kissed their asses in any way, and still had his way with WHOEVER they placed before him.

I'm with you all the way HC...even better why not do an expose on the Michael Vick "saga" if you would..dunno if you have already but something in this vein too'd be nice..

sorry, but i feel no sympathy for barry bonds. in fact, i'm just sick of hearing his name altogether. obviously he's a talented ball player, but many others are/have been talented without the performance-enhancing drugs or record-breaking titles. and is somebody actually gonna defend michael vick's no-good, greedy, animal-abusing ass? come on now, people! it's not racism in this case, folks. vick deserves to go down for this.

No one's 'defending' Vick, I'm a dog lover and therefore its despicable imo to do what was done to those dogs but we must dig beneath the surface and not get overly emotional about issues in this society. Logic trumps emotion in times like these..and you can't sit here with a str8 face and tell me his case/situation doesn't involve issues on racism, classism and a whole lot of isms, let's not even talk about being lynched in the court of pub opinion...

I mean Rae Carruth's jerseys for instance are still available...y?